Among the highlights in this newsletter include a student success story, recognition of music faculty, community collaborations and welcoming students back to campus.
With your support, we are able to strengthen the pathway for Hartnell art students to achieve their goals by providing them with internship opportunities, cultivating their entrepreneurial spirit, and supporting collaborations with community partners.
Your generous donations to the arts last year resulted in the funding of the following projects!

Donate to the Arts here! On September 1, 2021 the Council for the Arts recognized Sandy Rudo, Hartnell College Choral Director, for Outstanding Achievement in the Arts. Sandy ventured into unknown territory during the COVID lockdown to keep her students engaged with the ability to perform by creating the virtual choir. She took great effort to ensure students had access to equipment possible for their participation which lead to a collaboration with The Monterey Bay Aquarium on their “Favorite Things” project.

The Council for the Arts develops donor support to ensure strong arts learning and community arts engagement. Funds raised directly support the range of arts learning needs for student success and support programs that serve the Hartnell community on and off campus. It is a delight to introduce you to a community leader and champion of the arts at Hartnell, Julie Tucker. Julie has influenced the Salinas Valley for 20 years. During her three year tenure on the Hartnell College Foundation Board of Trustees, Julie served on the Harden Teaching Excellence Awards Committee and, until recently, was a member of the Western Stage Theatre Arts Council which today has transformed into The Council for the Arts. Julie has stepped down this year after 29 years of impactful contributions to the Hartnell College community.
An Alum of Hartnell College majoring in Liberal Arts, as a student Julie was a member of both the A Cappella Choir and Madrigal Singers. Her love for the arts began as a little girl when her parents would take her to see plays at the Wharf Theater in Monterey and attend the theater in San Francisco. Her parents were very involved in the arts as members of the Community Concert Association and the Monterey Symphony. She has passed her love for the arts on to her two children Lynn and David, and is proud to share that her daughter Lynn worked for a time in the props department at The Western Stage. Neither Julie or her husband Wayne consider themselves artists, yet both have supported the arts and athletics at Hartnell College for many years.
Julie shares fond memories of both she and Wayne enjoying Hartnell football games as members of the Booster Club sitting on the 50 yard line cheering on their team. Julie’s favorite memories of working on the Council include the Music Extravaganza concerts, watching the parents and extended families of students being exposed to live entertainment, and celebrating their musical achievements.
Her wish is that those concerts continue to nurture our students and their families and she believes that engagement in the arts is the key to developing artists, patrons and financial support for the arts.
Thank you, Julie, for your love and support of the arts at Hartnell. Your legacy continues in the students whose lives are touched and the audiences who come to enjoy the variety of experiences that arts at Hartnell have to offer. Asheesh Williams, a native of the Salinas Valley, attended Hartnell College as an adult on a mission to become an actor. Already holding a BA in Criminal Justice, he had other ambitions and the arts at Hartnell helped him achieve his goals.

Williams attended Acting 1 & 2, and it was there where he found people from all walks of life with the same goal. Those classes exposed him to nuances of the craft he was determined to pursue, while also paving the way for lasting relationships which have helped shape the direction he has taken his craft.

Ash Williams developed into a prolific story teller in his early years as a Christian song writer and rap artist. It was on MySpace 15 years prior, where he met his business partner Terrell Lamont, a Christian producer, song writer and rapper himself. The Duo recently created Algorithm, a web-series with a title noting a double entendre, inquiring whether we are really in full control of our choices and decisions.
Algorithm received it’s golden laurel and is now officially an award nominated show in the Indie Short Fest Los Angeles International Film Festival, nominated as a top 3 finalist for Best TV Pilot/Web Series out of 17-18 countries and thousands of submissions.
Williams credits his relationship with God as the cornerstone to his success, and shares advice for students in the arts to invest in oneself, through education, equipment, head shots and those things that will elevate you to the next level. He also suggests cultivating a core network of people who champion and support you.
Williams states, “Algorithm is shot completely with a Person Of Color (POC)/diverse cast written and directed by myself and Terrell Lamont who are Black and Black/Mexican mix. This is a huge win for us, our team, Neversleep Productions, & our communities as well as supporters on both East & West Coast.” The Western Stage (TWS) was awarded $59,500 from the Small Business Administration, Federal Shuttered Venue Operators grant. This influx will provide funding support for re-opening costs and expenses needed to produce the 2020 season this year through 2022.
Did you miss it? “The Wizard of Oz” was the first production featured on the Main Stage this fall. It was well attended and a delight for those eager to return to live theater, once again. With Jon Selover as “The Wizard” and a wonderful cast that waited one year to perform, the Oz was a fan favorite.

UP NEXT: “Noises Off” By Michael Frayn 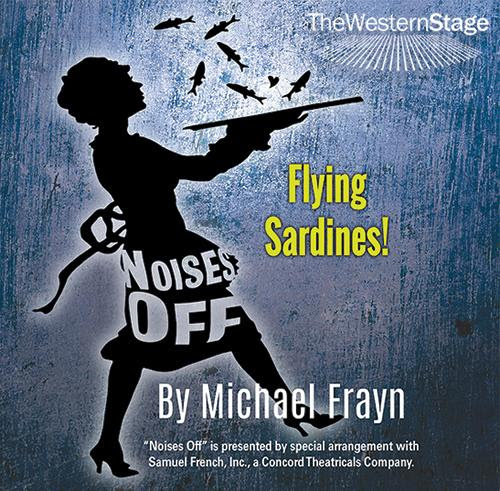 Called “the funniest farce ever written.” A joyfully out-of-control British farce about the auspiciously titled play-within-a-play “Nothing On,” told in three acts: dress rehearsal, the opening performance and a performance towards the end of an exhausting run. Brimming with slapstick comedy. Step behind the curtain and meet the under-rehearsed and overworked cast and crew as they bring down the house – literally! westernstage.com With great enthusiasm the Hartnell Foundation hires Jeff Gallagher to coordinate the Killian Scholars Music Program. Gallagher’s day job is University Relations at University of California, Santa Cruz but his passion is playing professionally all members of the clarinet family, the sax family, flute, oboe, and English horn.
He has performed in the pit orchestras at Hartnell/Western Stage in Evita, Little Women, The Secret Garden, The Drowsy Chaperone, Young Frankenstein, Nice Work If You Can Get It, The Producers, Into the Woods, West Side Story, A Christmas Story to name just a few.
Gallagher just finished the run of The Wizard of Oz, at The Western Stage with future project as follows:
We are delighted to welcome him to Hartnell College. Pictured is one of the pieces photographed from the 19th century Leslie Fenton Netsuke Collection, A Rabbit and Frog Wrestling on a Lily Pad.

The Gallery has been approved for National Endowment for the Humanities (NEH) funding due to an extension of the 2020 grant awarded to Hartnell College. As a result, The Gallery is creating a new website and catalog for the 11 collections held by the college. This project is also supported by the Council for the Arts grant fund made available by our generous donors from the 2020 Gala for the Arts. This upgrade will allow full accessibility of the collections to students, faculty and the community.
Pictured is one of the pieces photographed from the 19th century Leslie Fenton Netsuke Collection, A Rabbit and Frog Wrestling on a Lily Pad. Theater Arts and Cinema students hosted a Mini Fall Festival on October 21, 2021 in collaboration with the Hartnell Writer’s Guild. It was well-attended and included performances from the Theater Arts department, the Hartnell Jazz band and a display of pottery created by ceramic students. 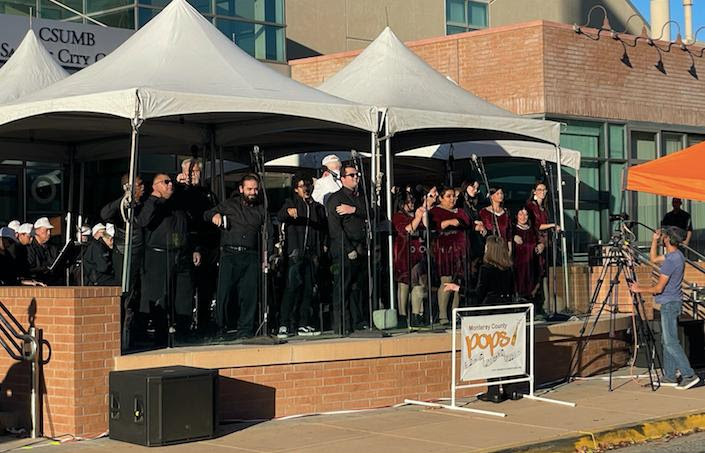 On November 11, 2021 the Hartnell Chamber Singers, under the direction of choral faculty Sandy Rudo, performed with the Monterey Pops at the Salinas Veterans Day Parade. “We were thrilled to be asked to participate in this event, it was a wonderful experience for all of us,” stated Rudo.

A student sent this feedback after the concert:
“Performing with the Monterey Pops and alongside so many musical featured groups was an incredible experience; having the opportunity to remember and acknowledge our local veterans, and their families as well as their sacrifice for our country was an honor and filled me with so much pride. I stood there in complete awe and utterly humbled that I could be a part of something so much bigger than me. It was what we needed, to feel again, connected to the world and humanity, knowing that we all, with our individual abilities and talents stood together in solidarity to uphold our country and the freedom we stand for.”

Help support student success in the Arts today! Please consider a donation to the Fund for the Arts:
Donate to the Arts here!
MENU